Blog - Latest News
You are here: Home1 / Education Case Studies2 / Murrow Primary Academy Stay Safe and Get Active with a STARS Walking B... 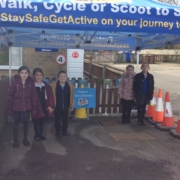 Murrow Primary Academy located in the East of England have been working hard to support pupils in getting active on the journey to school. The school faced many challenges with parking issues causing much disruption at the beginning at the end of the school day. Local residents close to the school were facing much disruption with their driveways being blocked and significant levels of traffic during these times.

Wanting to improve community relations, the school embarked on a mission to place health and wellbeing at the forefront of their school. This led Murrow Primary Academy to create a Stay Safe Get Active Walking Bubble using Modeshift STARS.

The school promoted their Walking Bubble through their online presence. Using social media such as the school Facebook page and the school website, the school began raising awareness in the school community.

Due to the location of the school, they went in search of a site to operate a park and stride scheme. They worked with the village hall to establish a scheme utilising the village hall car park for those coming from outside the village.

The school offered reflective incentives from the STARS Shop delivered in partnership with Brightkidz to support adoption of the Walking Bubble initiative. “I was really excited to walk to school, as I really wanted to get a reflector” says one pupil.

The school also purchased a Stay Safe Get Active Walking Bubble Gazebo to support adoption allowing for shelter at the park and stride site when the weather can be less favourable for some.

50 children out of the 105 children on the pupil role now walk to school which equates to 47%.

The school saw reductions in congestion around the school gate and saw an increase in walking. Approximately 20 families within the Walking Bubble now walk to school that didn’t before. More children arrive at school having done some exercise, which also contributes to the pupils’ daily mile target.

The teachers have also noted that some pupils who undertook the walk to school were better engaged due to the “sensory work out”.

Since implementation of the scheme, the school have not received complaints from local residents. There have been no fixed penalty notices issued at the school gate for illegal parking.

Looking to the future the school are hoping to get a new scooter and bike park to further promote and support active travel for school journeys. Murrow Primary Academy are also awarding team points for those who walk to school and are looking to host a scoot to school event in the future. They are also handing the Green School Agenda to the School Council who will deliver a poster campaign to promote school sustainability.

Nick Butler, Modeshift STARS Accreditation Manger says “Murrow Primary Academy are a great example of how schools can use the Stay Safe Get Active Walking Bubbles to improve the school run for the better.

By delivering the Walking Bubble initiative and supporting this with strong promotion; the school community are being rewarded for placing the health and well-being of pupils as a priority. This means pupils have more opportunities for physical activity in a safer environment around the school gate. Not only has this scheme seen reductions in congestion around school but it is also reducing vehicle emissions providing cleaner air on the journey to school”

Modeshift STARS Education is supported by the Department for Transport. If you would like more information about the Stay Safe Get Active Walking Bubbles or the Modeshift STARS Scheme visit www.modeshiftstars.org. If you would like to see the range of great resources available from the STARS shop delivered in partnership with Brightkidz visit www.brightkidz.co.uk/modeshiftSTARSshop

Pupils encouraged to #StaySafeGetActive this September!

Cambridgeshire County Council Road Safety Team create a bubble of active tr...
Scroll to top
We use cookies on our website to give you the most relevant experience by remembering your preferences and repeat visits. By clicking “Accept All”, you consent to the use of ALL the cookies. However, you may visit "Cookie Settings" to provide a controlled consent.
Cookie SettingsAccept All
Manage consent